The treatment of pancreatic cancer various and is dependent on whether the disease is confined to the pancreas or has extended into vital adjacent structures (e.g. vessels) or spread to other organs (e.g. liver).

Generally, surgery can be considered if the disease has not spread outside of the pancreas. In these cases, the cancer can be completely removed. 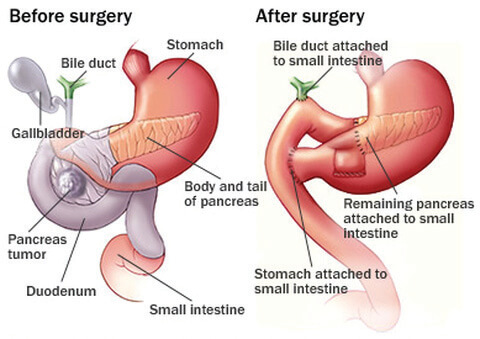 In order to reconstruct the digestive continuity, the small bowel is joined to the pancreas, then to the bile duct and also to the stomach.

If the lesion is more towards the tail of the pancreas, a distal pancreatectomy is indicated which sometimes can be performed laparoscopically. During this procedure, the pancreatic head stays behind and only the tail is removed. No reconstruction is necessary, but the spleen is often removed as well for oncological purposes.

In cases where surgery is not indicated, chemotherapy is used to control the cancer. If the cancer is locally advanced and is without distant metastases, chemotherapy may be able to shrink the lesion and then surgery may become an option.

The morbidity after surgery for pancreatic cancer is about 35%, and the reported mortality rate is approximately 3%.